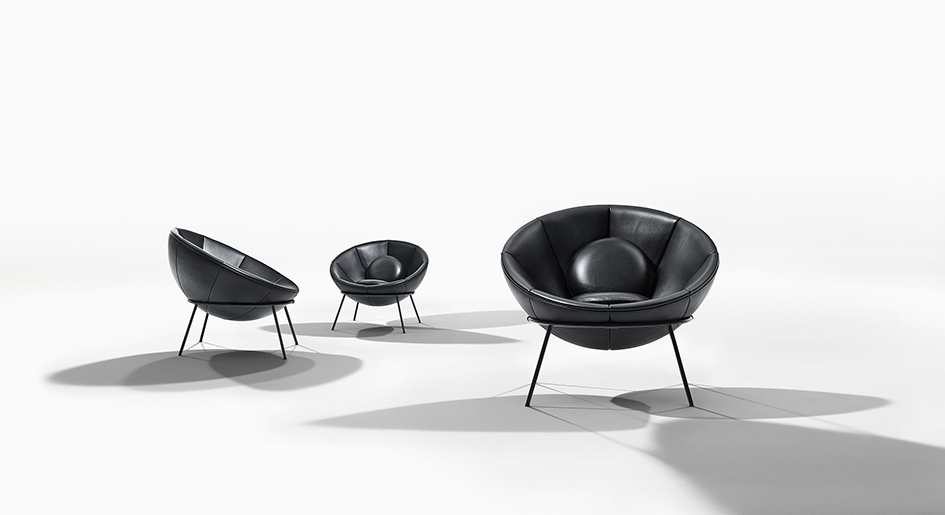 What does it mean to make an edition? Is it necessary to recreate the object identically? Follow the steps of the past in lockstep and forgo the innovations of the present? Is it more important to keep the spirit of the original or its original technical attributes? How closely linked are ideas and ideals to technical processes?

Arper’s support of the exhibition "Lina Bo Bardi: Together” presented the company with these interesting questions. The exhibition–curated by Noemi Blager– combines the art and craft of artist Madelon Vriesendorp, filmmaker Tapio Snellman and the work of design collective Assemble in an installation that presents a vibrant reenactment of Bo Bardi’s spirit and design philosophy. Blager saw the potential for Arper to participate in a similar capacity and engage with the Instituto to make an edition of the Bardi’s Bowl Chair

In the spirit of this unique creative collaboration and Lina’s design philosophy of open engagement with culture, place and people, Arper embraced the unique opportunity to investigate and interpret one of the designer’s most celebrated creations with the aim of evoking the spirit of her creation, while at the same time expanding the design to suit Arper’s modern methods of production.

Designed in 1951 in Bo Bardi’s adopted home of Brazil, the Bardi's Bowl Chair is an icon of Lina Bo Bardi’s adaptive style. Like much of Bo Bardi’s work, the Bowl Chair was not created to be a staid luxury product, valued for its design value alone, but as an affordable and flexible object created to seamlessly integrate into any environment. 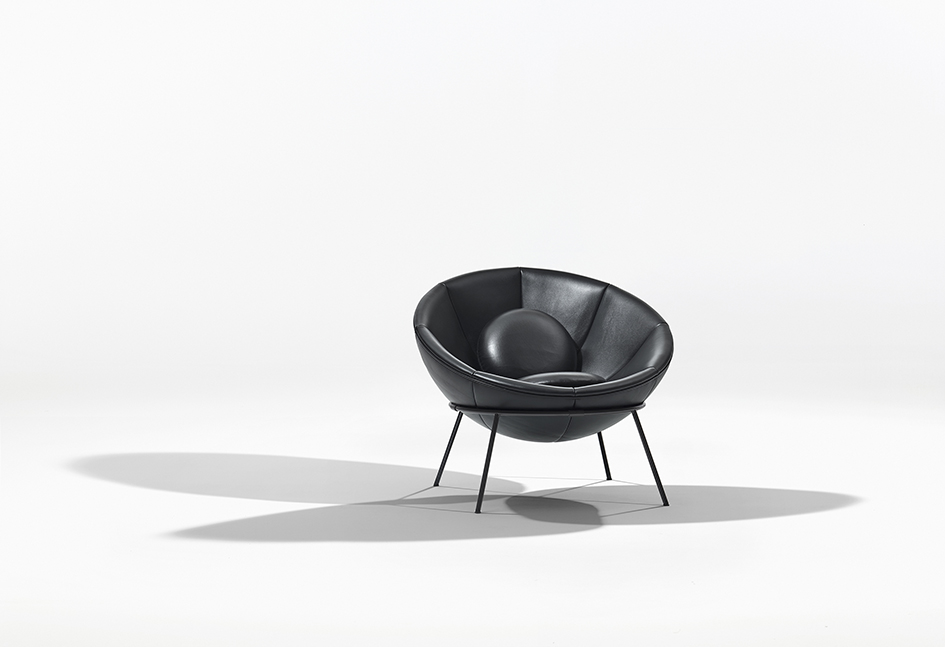 With the combination of the bowl and base, the modular chair could be positioned to perform myriad functions. Upright and gathered round a coffee table, the chair becomes a catalyst for social interaction; angled downwards, a nest to submerge into with a good book. When set with opening perpendicular to the floor, the chair becomes a cradle for a sheltered nap. Balancing the worlds of industrialized fabrication and the individualized object, Bo Bardi envisioned the Bardi's Bowl Chair as flexible in structure while universal and essential in form. But, as with all of Bo Bardi’s designs, the ultimate emphasis remains on the human interaction with the object. 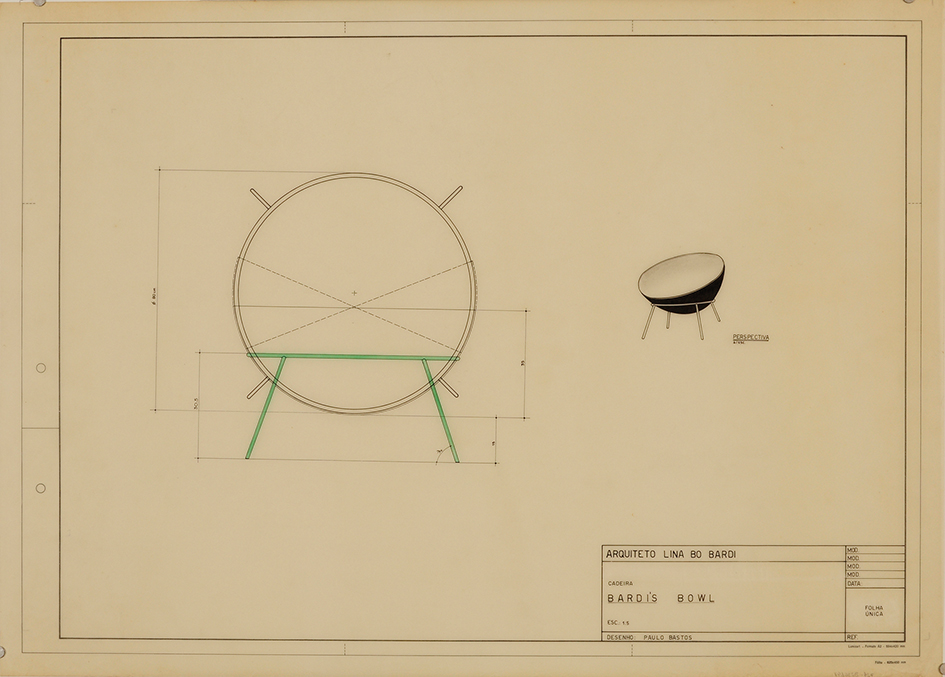 Working with the Instituto Lina Bo e P.M. Bardi - that after Lina’s death in 1992 became the guardian for the copyright of her designs-, Arper has created a limited edition reproduction of the Bardi's Bowl Chair dedicated to continuing the designer’s legacy. In the spirit of the designer, Arper has attempted to integrate the same precision and sensitivity in this interpretive reproduction that are evident in Lina Bo Bardi’s renovation of historic buildings like the Historic Centre of Bahia and the legendary SESC Pompéia. 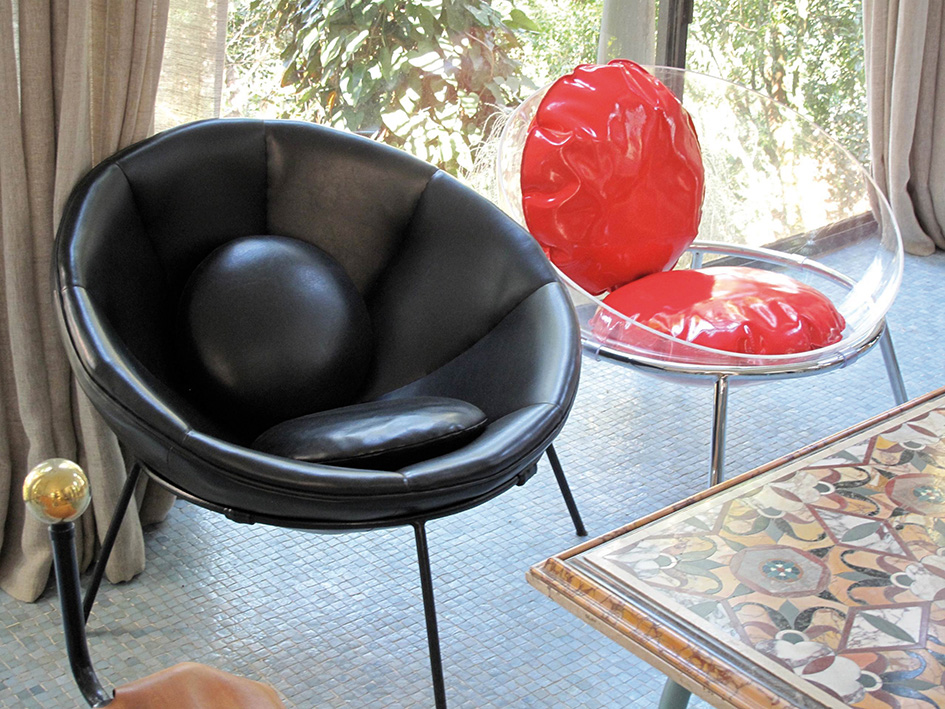 Entering into the collaboration, there was little concrete documentation available on the production specifications of the chair. Only impressionistic and conceptual sketches existed beyond two original iterations—a single black leather bowl chair produced in 1951, considered most representative of Bo Bardi’s vision, and another, probably fabricated later, with a slightly smaller transparent plastic bowl seat and vibrant red patent pillows. Both now reside in São Paulo, at Bo Bardi’s home, the Casa de Vidro, the Glass House. 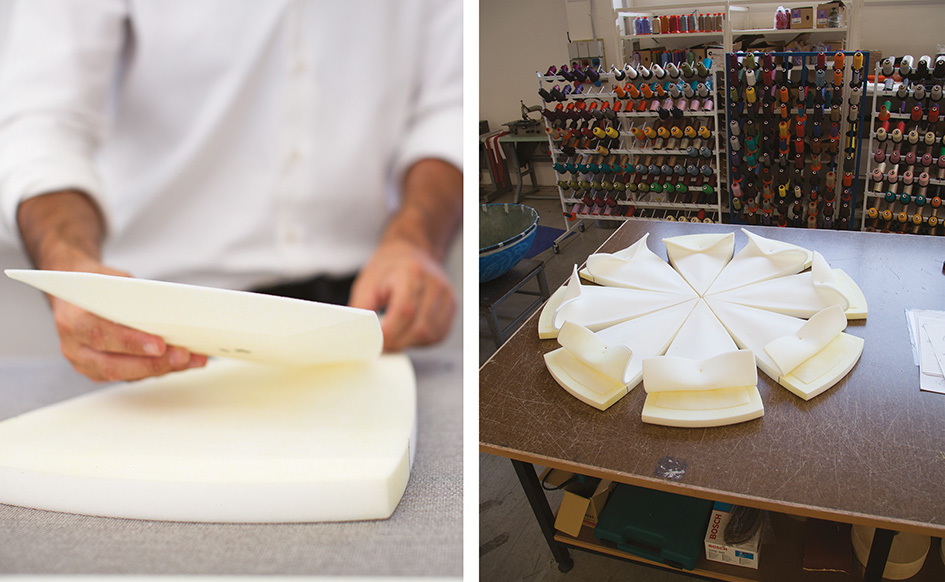 Bo Bardi did not leave instructions on the precise measurements or details of the design. With the Instituto as design partner standing in for Lina, Arper assumed a creative approach, balancing an interpretation of the original design with contemporary advancements in technique and manufacturing, one reflective of Bo Bardi’s original vision, but better suited to fit the abilities and advantages of industrial production.

Through the course of collaboration, it became clear almost immediately that fabrication processes native to Brazil at the time the Bardi's Bowl Chair was conceived were almost entirely artisanal. Dimensions, interior structure, upholstery detailing, the density of the foam and the softness or spring in the seat were all up for consideration. 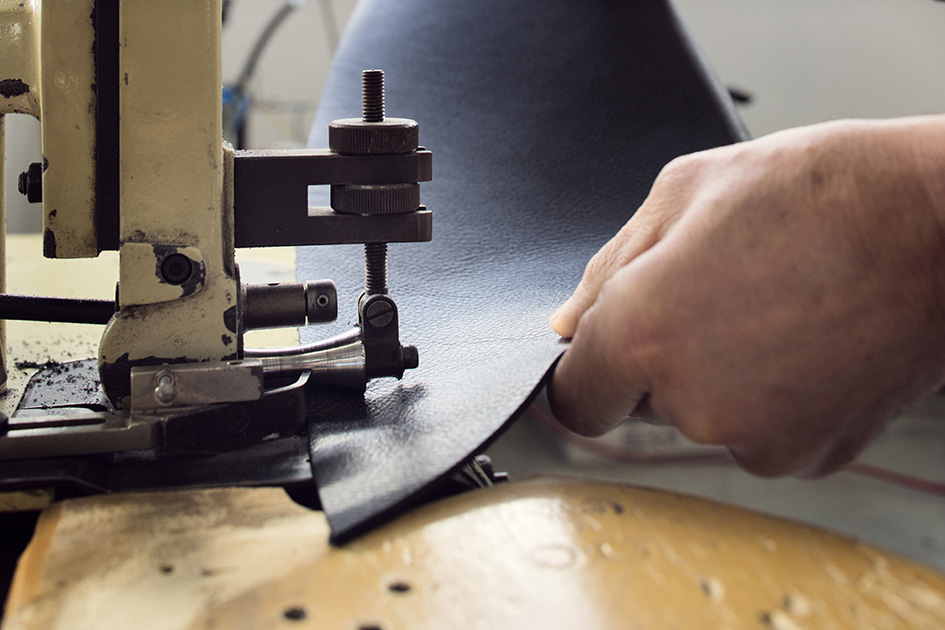 A conversation between Arper and the Instituto ensued through every possible means. Director of the Instituto, Anna Carboncini and design historian, Renato Anelli were critical partners from the beginning. Communication was almost exclusively via digital means. Even so, the universal language of hand gesture, perhaps the deepest cultural link shared between Brazilian and Italian cultures, prevailed. The Instituto communicated the qualities and dimensions of the original in relationship to the hand and the body, physically conveying its relative proportions and qualities, thickness, depth, firmness, softness. 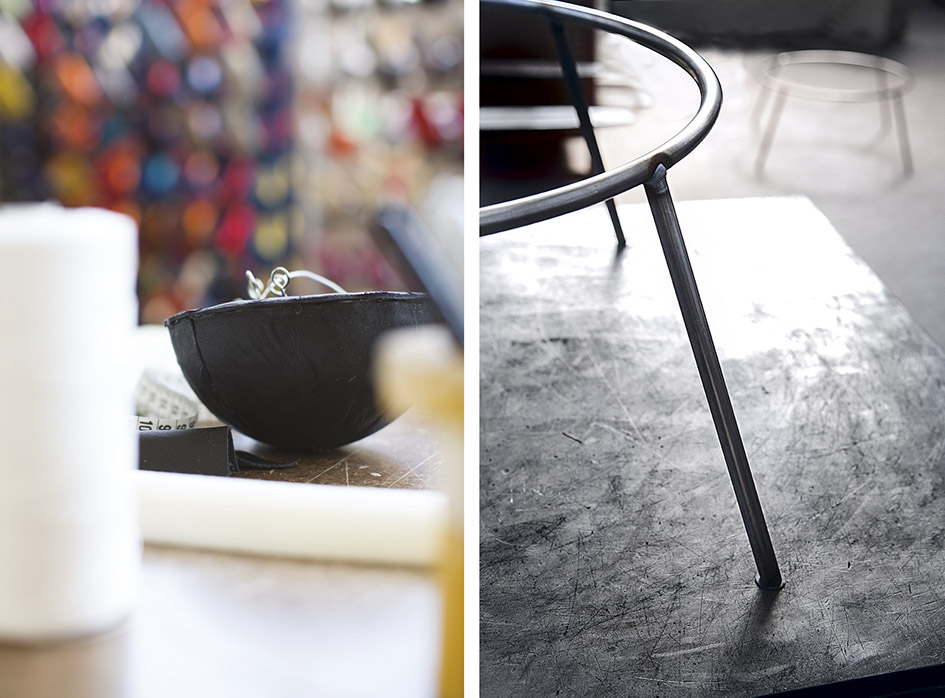 In turn, Arper created a template of considerations to guide the Instituto through the information collection process to capture the data necessary to “reproduce” the original and create construction drawings. A small-scale prototype was made to explore processes and possible improvements.  Most immediately, the materials and processes for the interior bowl were up for debate. The original was hand-forged iron, rendering the form heavy and inflexible, incompatible with the demands of contemporary industrial production and quality control. Arper recommended that the bowl be fabricated in plastic to build lightness, strength and flexibility into the structure. A plastic bowl would receive the complex structure of foam and upholstery smoothly and archivally and facilitate the adequate malleability necessary to construct and fit the leather. Patterning was produced to cut and assemble the upholstery. Every detail–down to the small leather covers placed around the round steel frame of the chair to hold the bowl in place–were reinterpreted.

As an Italian architect who embraced the ideals of the modern movement, Lina’s design philosophy was always one of accessibility, engagement and generosity. In her own words, "To standardize means to extend the possibility, to make it possible that something for a few may be extended to many, means to ‘improve,’ because it is much easier to deeply study a basic organism than it is to study an indefinite, countless series of them." (1951). 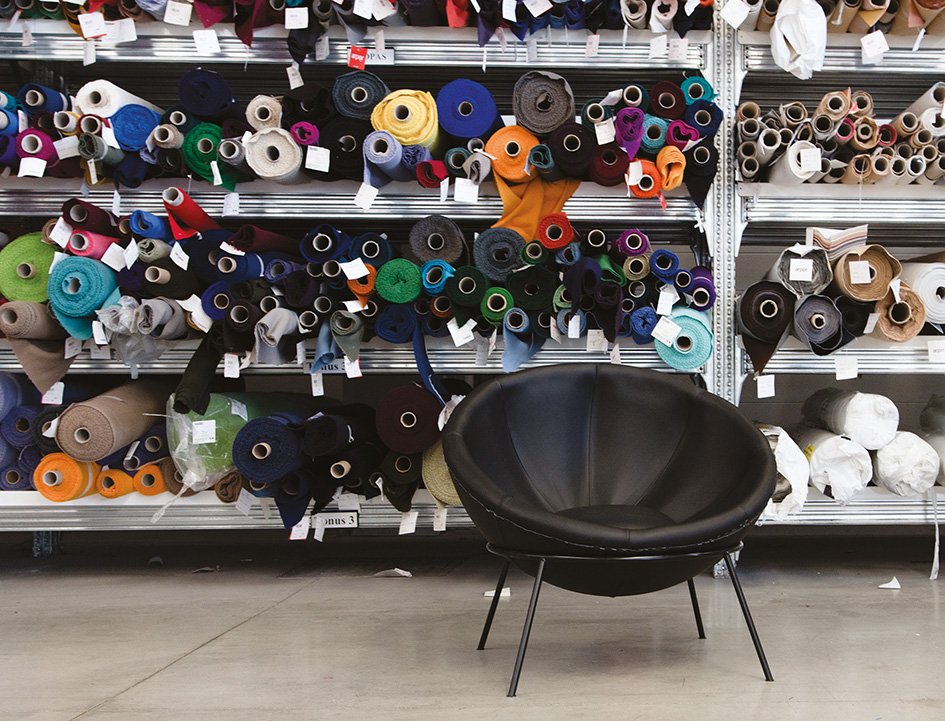 Sharing these values, Arper embarked on the journey to fulfill this ambition: to standardize the production of the Bowl Chair to make it available and accessible to the public. In the words of Arper President, Luigi Feltrin and Claudio Feltrin, Arper CEO and Vice President, “In doing this, we wish to give the Bowl Chair and Lina’s way of thinking a future. The limited edition creates a link between the past and the future.” 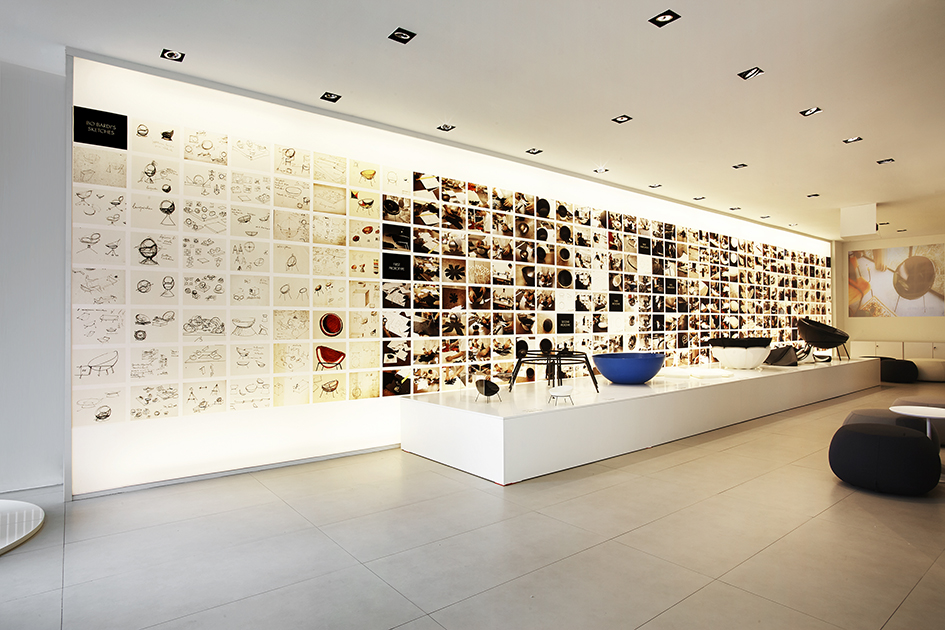 After three months of conversation, collaboration, design and testing, Arper and the Instituto presented a single version of the industrialized Bardi's Bowl Chair in London at the opening of the exhibition "Lina Bo Bardi: Together” in the fall of 2012, while during the Salone Internazionale del Mobile 2013 in Milan, Arper introduced  "Edition: Bardi’s Bowl Chair - A Dialogue Between Arper and Lina", a Fuorisalone exhibition at its Milan showroom in via Pantano 30 to present the making of the edition of Bardi’s Bowl chair. 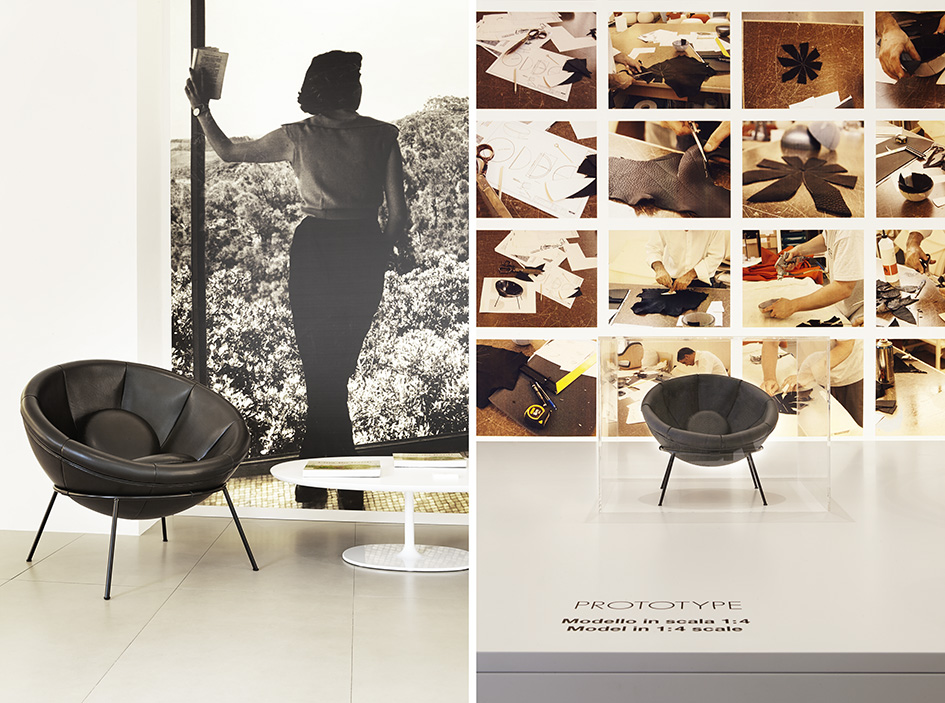 Though the only traceable original that exists is in black leather, there is evidence that the Bardi's Bowl Chair was produced in many finishes and colors as is reflected in Lina’s many sketches. Similar to Arper’s Catifa, the Bardi's Bowl Chair was initially conceived in many different colors and finishes that could be recombined in many variations, a very simple and essential idea which still has relevance and usefulness.

For this reason, Arper is continuing to develop the material palette of the Bardi's Bowl Chair, working to refine the interpretation further with a suite of fabrics that reflect the vivacious spirit of Lina as well as the creative symbiosis of Brazilian and Italian cultures. 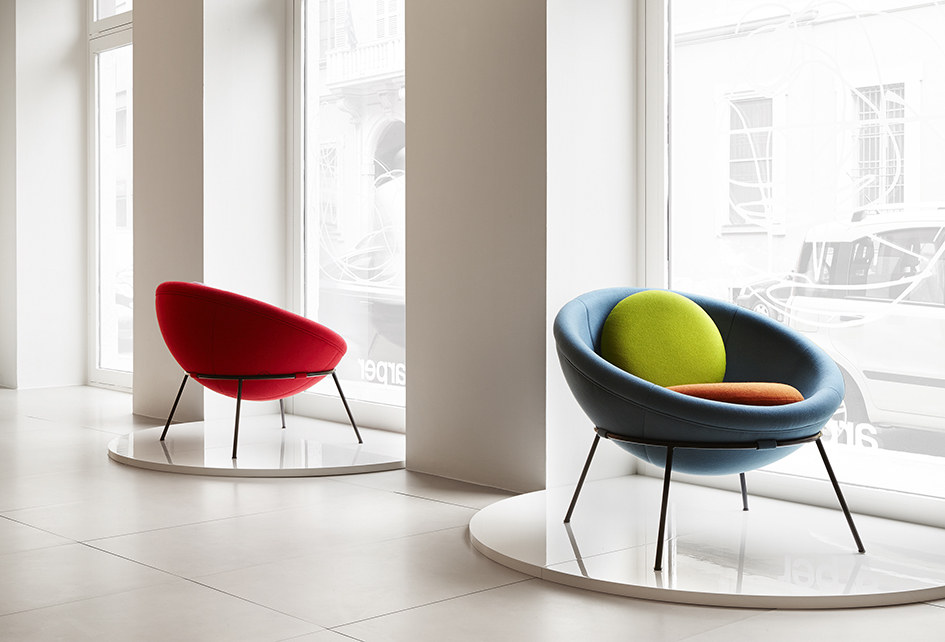 With the reproduction of the Bardi's Bowl Chair, Arper hopes to bring to light the inspiring work of Lina Bo Bardi. Through an examination of this singular and versatile design, we see not only the mark of the designer and her socio-centric philosophy, but also the influence of her work from a historical perspective. We are able to see both the evolution and the continuity of forms only visible through the lens of time. 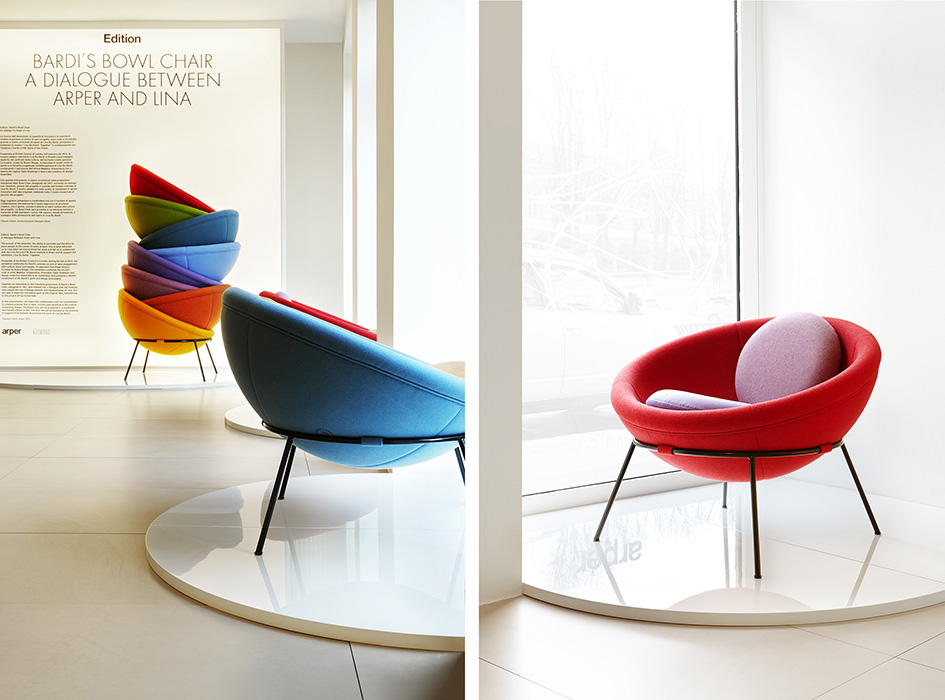 Finally, in the spirit of Lina Bo Bardi, Arper is donating a number of chairs of the limited edition to support the Instituto Lina Bo e P.M. Bardi. A portion of the profits of the remaining chairs will be used to reinvest in cultural and social programs. As Bo Bardi always intended, for the people. 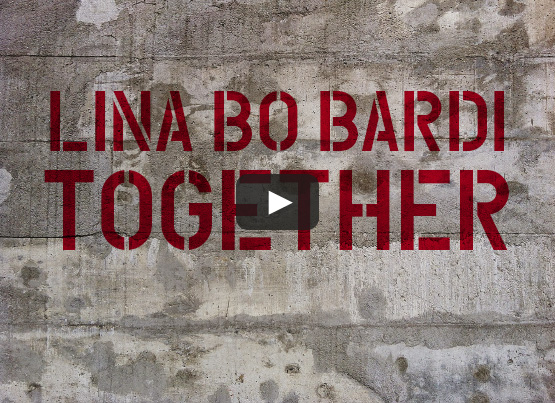